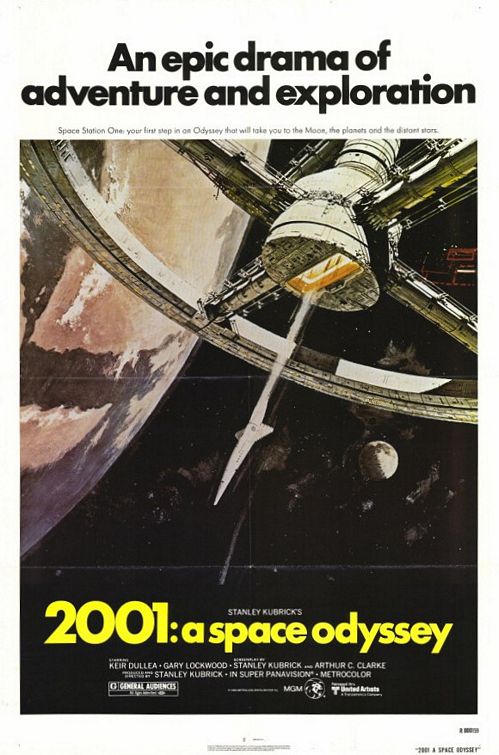 We review film #15: “2001: A Space Odyssey”…the 1968 sci-fi classic that proves you can make a 2 1/2 hour movie where every frame can potentially be a piece of art.  Silly Kubrick and your attention to detail.

It's just 2 1/2 hours of Photobooth filters!

Wow. I’ve never heard anyone so reticent to seriously discuss one of the most influential films of all time. I saw 2001 when it first came out, and the world was a lot different. Politics wasn’t yet the bad word or intractable equation it is now. The Space Race was a real thing, and kids wanted to grow up to explore. Star Wars, superheroes, Jaws, other “tentpoles” just didn’t exist. A single film could play in one movie theater for a year or more. And yet even then, 2001 was a singular cinematic experience, one that never pretended to invite easy interpretation or the typical pat, Hollywood ending tied up with a bow. I know it’s great fun to be all ironic and flippant about your experiences with the movie, and how you maybe didn’t get it right away and therefore hate it. The real 200’s, not the one in the movie, is a time of instant gratification and avoidance of complexity. It’s normal to view most things through a lens of “irony,” because we’ve just become used to being so damned disappointed all the time. Try this on — Kubrick was full of irony — it’s infused in all of his films — and he was a master of it more than 50 years ago, and the main element he consciously left out was SENTIMENTALITY – the cornerstone of any movie now that hopes to make back its production costs. But Kubrick was also an intellectual and a great visual artist, so his pallet was full of options. I LOVE seeing the superhero movies today with my kids, but they also saw 2001 at the age I did – 8 years old – and they were intrigued, engaged, and I could hear the little wheels in their heads turning as they began to ask questions, form theories, and generally continue the really rewarding pursuit of finding meanings – not THE meaning – from questions raised by a movie like this (there aren’t many movies like this). Sorry to be so hard on you guys. If you really need to know, NOW, what happens in the movie – then read Arthur C. Clarke’s novel, which was written CONCURRENTLY with Kubrick. It was a multimillion dollar experiment in telilng the same story from the point of view of one of civilization’s great futurists, and at the same time from that of one of cinema’s greatest visual stylists. Finally, as for there not being much dialogue or the sounds often being limited to only breathing — cinema is a VISUAL art. We forget this, having grown up on endless TV shows of people talking to each other, and as many movies that do the same. But as a VISUAL ART, I think Kubrick, and 2001 as his prime example, SHOW us rather than tell. This film isn’t for the casual viewer, but it yields great rewards, and its “study” makes you think about all film in an expanded point of view. If you hate it, fine, but just know WHY.